April 17, 2011
This happened to us a sometime ago. WTF? This is the last time I will put anything on the cloud as primary work document.

Yes, before anyone of you pops up to say "Google Cloud Connect". Yeah right. 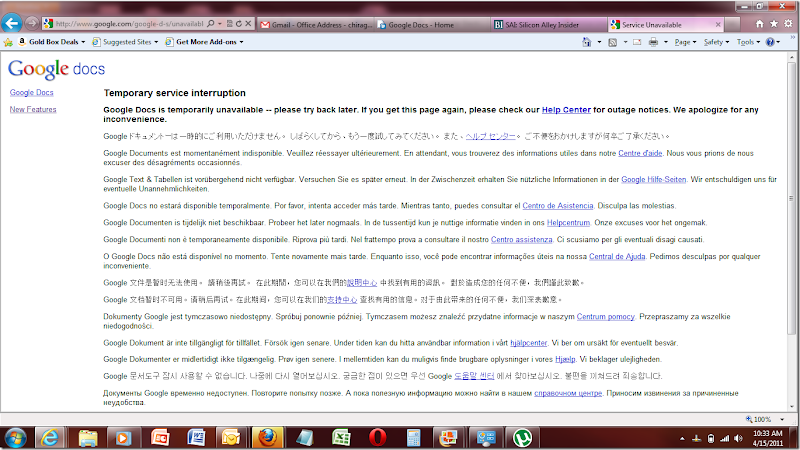 Unknown said…
1xbet - Best Bet in 1xBet - Download or Install for Android
1xbet is the best betting app in the world https://tricktactoe.com/ created for esports. It is kadangpintar a one of the safest and 출장샵 most trusted names among players. It offers a 1xbet korean user friendly interface
April 3, 2022 at 4:30 PM

Popular posts from this blog

September 02, 2008
So much is said about social networks and how catch all social networks are all the rage right now. But look back a few years and you see all a landscape littered with yesterday's stars. Friendster Hi5 and to some extent Orkut (Some may argue that Orkut is alive and kicking in India, but I beg to differ. Orkut isn't hip any mre, which means that over time it will slide into nothingness. After all which woman, wants 100 friend requests from absolute strangers) And not to mention that the hundreds of new social networks that pop up every other day. Clearly a gold rush is on. The acquisition of Desimartini by HT 's Firefly eVenture is a symptom of this gold rush. With the reported difficulties of Google & MS to monetise their respective ad properties of MySpace and Facebook, it is clear that we have seen all the hypergrowth we had to see, It will grow, there are after all several billion people on this planet but not necessarily to the point, wher
2 comments
Read more

Hiding behind the brave soldier dying on the border...

January 03, 2016
This is a draft response to TRAI on their consultation paper on Differential Pricing for Data Services. Please feel free to comment, suggest improvements and most importantly use in part or in whole to send in your comments in support of  Differential Pricing for Data Services. (Structure borrowed from the STI campaign) Emails should be sent to  advisorfea1@trai.gov.in Dear Sir, Thank you for this Consultation Paper on Differential Pricing for Data Services; The TRAI should bring in rules that foster innovation not just in the Internet services Domain, but also in the domain of Internet access. This will invariably mean to allow a free hand to TSPs to innovate in distribution and pricing. This would include differential pricing - especially the practice of “Zero Rating” and other such innovations. I hope the TRAI considers my answers. Thanking you My answers: Question 1: Should the TSPs be allowed to have differential pricing for data usage for accessing diffe
1 comment
Read more